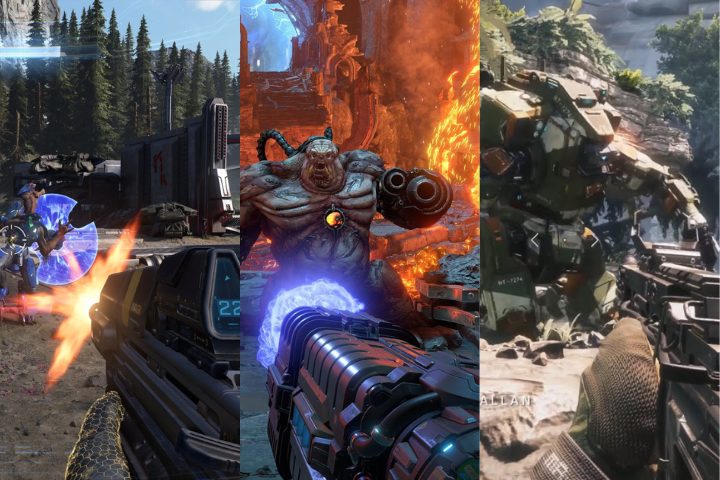 With an abundant amount of games Game Pass offers, it can get quite overwhelming; especially if you’re looking for specific types of games. With a Hidden Gems list already available, and a Best Co-Op list recently released; here are 5 FPS games now available to play on Game Pass PC.

Another benefit of Microsoft purchasing Bethesda, the entire Doom series is now available on Game Pass. For those not familiar with Doom, to make it short, you run around destroying monsters with your big guns, or come close to them and rip them to shreds, the choice it up to you.

Story doesn’t matter too much in these games since your goal is just to destroy monsters, so starting with any of the games would be fine since the graphics of the original Doom and Doom 64 didn’t age too well. Either way, if your goal in a game is to shoot and destroy everything in your path, you and Doom could be a match made in heaven.

An Xbox classic, Halo has been a go to FPS game for Xbox users since the dawn of time. I’ve only started playing recently since the Halo Infinite multiplayer was released for free on Steam. Since getting Game Pass, however has given me access to rest of the Halo series, and it’s safe to say it has some of the best gunplay I’ve ever experienced.

Other than the multiplayer, you’re also able to follow Master Chief’s stories and adventures with the campaign; and with all the games being available right from the get go, binge playing through the campaign should be no problem.

Probably the most tactical on the list, Rainbow Six Siege has been around for quite awhile, making the competitive scene quite sweaty and challenging if you’re up to it. What makes this game quite different from the others on the list is that the environment plays a huge role in ensuring victory. Being able to set traps, and shoot through walls makes a huge difference when winning or losing.

Whether you’re rescuing a hostage, defusing a bomb, or taking control of an objective within a room, you’re assigned to either be an attacker or a defender. That being said, the role of attacker and defender are pretty self-explanatory, but what makes this game a challenge is the communication with your team. Communicating with your teammates is key, as attacking or defending, the need to strategize and making sure everyone knows their role is huge. So if that’s the type of shooter you’re looking for, look no further.

If you’re looking for large scale battles and mindless arcade type shooting, this game series might just be for you. Similar to the Call of Duty games, Battlefield offers multiple game modes such as Team Deathmatch, Conquest (Large Scale Conquest), Domination, and many others. A campaign is also available for those who enjoy a good story.

Whether it’s Battlefield 1, 4, or 5, Game Pass PC has got you covered. Playing these games do require you to have an Origin account however, as the game makes you log in to your Origin in order to access EA Play. So a small disclaimer when wanting to play these games, or any EA game found on Game Pass for that matter. If that isn’t a problem for you, then by all means enjoy.

Another EA title, Titanfall 2 combines your traditional shooter game and awesome mech action. What makes this different from your other traditional shooter is the addition of the Titan Meter, which fills up as you play the game. When full, it allows players to get access to their mechs when playing. The meter also fills up quicker when doing damage to opponents or finishing objectives on the map, depending on the game mode.

Titanfall 2 also comes with a fantastic campaign mode with a great story. You play as Jack Cooper, a militia rifleman whose one goal is to become a Titan Pilot. As a result, he receives off-the-books Titan training from Captain Tai Lastimosa. So whether you’re looking for some awesome online multiplayer shooting, or a fantastic story with great gameplay, this game is definitely for you.