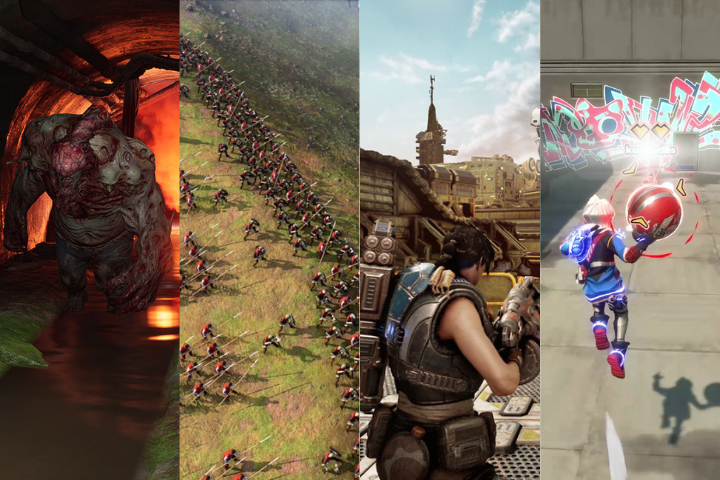 A staple to Xbox users, Gears Series have been an Xbox and PC exclusive since 2007. The Gears series doesn’t only offer players high-paced action, and incredible gunplay, but a story worth following from beginning to end.

With each installment having it’s own plot, explaining each would take forever. The game does take place though in the on the fictional planet Sera, an Earth-like planet wherein a millennia-long war has been leaving humanity on the rink of extinction. The story continues on from there with 5 main installments all available on Game Pass.

2. The Age of Empires Series

One of the best real-time strategy games, the Age of Empires series has been an OG in that game genre. To make the series even better, the fact that you’re able to play with or against your friends is just icing on the cake.

If you’re not familiar with the series, Age of Empires allows you choose between multiple civilizations, manage their economy to ensure that you end up with a much better army than the other team. As easy as it sounds, there is a lot of micromanaging in this game, so much so that if you fall a few seconds behind your opponent, it will be quite challenging to make a comeback. If you’re looking to spend hours with your friends, strategizing and going to war with the boys, you’ll absolutely love this game.

A game that flew under the radar upon release was Knockout City. A 3rd person “shooter” except you don’t use guns, you use dodgeballs. An interesting and weird concept, but they make it work. The game allows a squad of 3 per team, so you and 2 of your friends could easily squad up and doink other players with dodgeballs.

As simple as the game looks and sounds, there’s actually a little bit of strategy to it. The most important thing when playing this game is passing the ball, the more passes you throw to your teammate, the more charge up the ball gets. As a result, the ball is thrown quicker making it difficult for the other team to catch or dodge. You yourself could even turn into a ball, and the mechanics work all the same. This game is perfect for those who just want to get a quick game in or two, and stop playing. There’s also a ranked mode if you want a little bit more competitiveness.

A spiritual successor to the Left 4 Dead series, Back4Blood brings back the similar gameplay to the aforementioned game and a little bit more. Just like Left 4 Dead, the game places you with 3 other players, whether it be bots, randoms, or with your friends. It is your goal then to clear each stage in order to proceed to other levels.

What does make it different however is the card collecting aspect of Back 4 Blood. Before each level, you are to choose cards from the ones you’ve collected in order to add buffs and power ups to your character. To counter this, you then need to pick corruption cards that will debuff your characters in other ways. If you enjoyed Left 4 Dead, and are intrigued by the card collecting, you’ll enjoy this game.

Now, hear me out on this one. Despite it’s lackluster release in 2018, Fallout 76 has had multiple updates, patches, and DLCs that has further improved the game to the point where it’s actually pretty enjoyable. Ever since the Wastelanders expansion and DLC, a new story, weapons, events, and NPCs have been added into the game, giving you so much to do.

Aside from the additional content, Fallout 76 brings in the similar base building mode that was brought in for Fallout 4. Some users, after finishing the main quests, focus more on building the craziest of bases. Others focus more on events, trying to create the best “build” for their characters. There are many ways to play the game, which I find great. The community is also fantastic. Simply put, if you enjoyed Fallout 4, you’ll most likely enjoy Fallout 76.