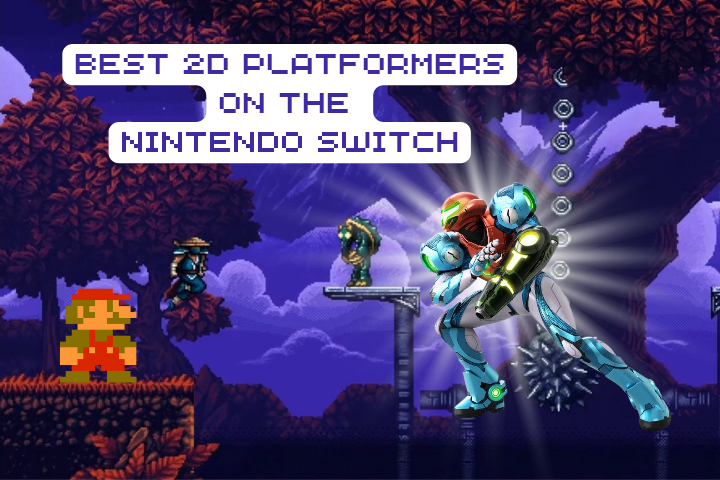 2D platformers have been a staple in video games since the 80s, with games like Donkey Kong and Super Mario Bros. I’ve grown to love 2D platformer games; the challenge of trying to beat the same level over and over then plowing through it on your last attempt it extremely satisfying. I’m currently playing through Hollow Knight, so just a disclaimer if you’re wondering why it isn’t on the list. And where else could I play one of my favorite game genres, than my all time favorite console, the Nintendo Switch. So here are 5 amazing 2D platformers you could play on the Nintendo Switch.

This came as a surprise to everyone when this game was first announced. The world had been waiting for a new Metroid Prime game ever since the Switch launched. But when Metroid Dread was announced, people were just happy to find out that Nintendo hadn’t abandoned our favorite bounty hunter.

The story doesn’t really matter in Metroid games, so it isn’t really necessary to play the previous games, but what does make this game different than the others is the addition of the E.M.M.I., a powerful robot that was made to destroy Samus. There are multiple areas where we encounter these E.M.M.I.s , and each one has its own quirk that make it even harder to run away from With this being the first and only Metroid game I’ve ever played, I had an absolute blast playing this game. Metroid Dread is $59.99 on the Nintendo eShop.

I was never really a Sonic fan as a kid, so when Sonic Mania was first released I never really paid any attention to it. I did however pick it up on sale when I found out that this game started as a fan game. That’s right, the highest rated Sonic game in 25 years were created by fans then Sega had the game published.

Sonic Mania provides players with a beautiful path of Sonic’s history with remixes of old levels, and fresh new levels that still give us those old 90s Sonic vibes. And, of course, how could I forget Sonic’s old friends Tails and Knuckles, who are also playable characters in this game. The DLC also provides gamers with 2 more playable characters, giving us even more hours to put into this game. Sonic Mania costs $19.99 on the Nintendo eShop, but is constantly on sale, so look out for it.

I have this game up there as probably one of my favorite games ever. Katana Zero follows Subject Zero, an assassin with amnesia, equipped with a katana, who can also slow down time. It’s a lot I know, but what makes this even better is neo-noir metropolis this game is based in. Subject Zero must unravel his past, but at the same time take on hitman contracts in and around New Mecca.

This platformer gives you the opportunity to approach almost every level however way you want. Whether you walk in detected and just started decimating enemies, or the stealth route, quietly taking each person out one at a time. Do be warned though that each stage does have a time limit, so move quick, but be smart about it. I can’t talk about this game without mentioning its soundtrack. Each level has its own custom soundtrack, giving off different moods when playing the different levels. The music is good in this game, that I actually have some of those songs in my Spotify playlist. Katana Zero is $14.99 on the Nintendo eShop.

The Messenger is a fantastic game that provides both 8-bit and 16-bit graphics, giving us a taste of nostalgia whichever way you look at it. The story is nothing special, as you are a ninja who ends up being the chosen one and is appointed to deliver a scroll to the top of the mountain. What does make the story worth reading, however, is the humor involved in the writing. This game doesn’t take itself too seriously and provides a very good sense of humor.

The humor, though, makes up for how challenging this game can be. With incredibly tough boss fights and amazingly crafted levels, the satisfaction when finally defeating these levels and boss fights are through the roof. If you’re looking to get into platformers, and are looking for something challenging, The Messenger is perfect. And just like Katana Zero, its soundtrack is one of the best I’ve heard. The Messenger is $19.99 on the Nintendo eShop.

These creators get real creative with their levels, levels that not even Nintendo could come up with, so despite having the repetitive mechanics of a Mario game, it’s a different experience with every level. As for me, I’m in the middle of trying to finish Solarhorse’s Super World, VY4-KLS-C2H is the code, have fun!