Valorant Mobile: What to expect

The recent announcement of Valorant Mobile brought about questions and confused excitement from the community. Is it going to suck? Is it going to create a whole new spectrum of competitive play? Well, the truth is no one really knows for sure yet. But what we can do is share our expectations on this upcoming mobile game. As a quick recap, Valorant’s executive producer, Anna Dalon, shared the plans of extending their free-to-play, first-person shooter game into the mobile platform. She noted that the studio had a certain ‘checklist’ before moving in on this plan, and if they couldn’t follow through with their own parameters, they would’ve dropped the project completely.

With that out of the way, we can note down that their decisions for Valorant mobile aren’t done haphazardly. Riot wanted to relay that they didn’t want to release a comprised version of Valorant and instead release a game that can offer a unique experience to the player.

So what evidence do we have so far? Well, we have a picture of what may be the button layout for its mobile version. A Reddit user named Spacixr leaked a screenshot of the game a year back. He shared that he came across this as he was trying to play the game on his laptop, but with its tablet mode turned on. 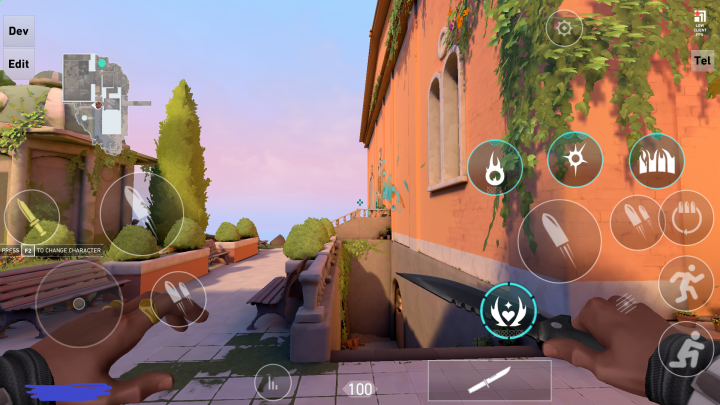 It may look daunting as to how many buttons there are on screen, but do be reminded that Valorant has a ton of operators with unique abilities—not to mention the inclusion of its gunplay as well. What we do want to see is the option to move around the buttons in the layout to cater to different game styles from players.

Valorant mobile will not feature cross-play

Can you imagine the sight of mobile players going against native PC players? Absolutely insane. Donlon emphasizes that Riot has no plans for cross-play between mobile and PC. Instead, Riot plans to create a console version of Valorant, but that instance isn’t prioritized at the moment.

Since Riot is making Valorant Mobile an independent game, we may expect them to tweak how abilities interact with each other. We all know Wild Rift is a game based on League of Legends, and in essence, is technically the same game. However, Riot changed it a bit to give a new experience to its players. The same may be done for Valorant mobile, so we may get enhanced abilities and possibly, new idle animations for operators, new skins, or even mobile-exclusive event. Anything can happen. Finally, we expect to see a whole new competitive scene for Valorant Mobile—revolving around the mobile platform itself. At this point, it’s not weird to assume that mobile games do have the potential for competitive play. It has a huge reach for people with a smartphone, which would then create certain groups that want to take their casual gaming experience to a pro-level of play. The esports scene just keeps growing, and we see Riot going along for that ride.

Nothing has been confirmed yet by Riot, but we may see more about it in a year or two. It’s exciting to see what big companies can do to extend their top titles to different and accessible platforms.

What do you guys think about this game? If you have any other thoughts or additional information about this, feel free to share it in the comment section below.

As always, Game on!