“The real idea of AirConsole is to bring people together, play on the same screen, either cooperatively or as competitors, and get some real bonding time,” Anthony Cliquot, Chief Operating Officer of AirConsole said.

Through a partnership with SKY, AirConsole offers a wide array of games for all with over 160 multiplayer titles, varying from different genres, such as quizzes, sports, racing, strategy, cards, classic arcade, and party games.

Among the games is the “Trivia & User Quiz,” a fun interactive trivia extravaganza that allows two to four players to test their wits in a series of various questions. Another game is “The Neighborhood,” where two groups feud it out in a fun slingshot battle with a goal to reign supreme by destroying the home of the other player. However, those who enjoy Kart racing may try out “GoKartGo! Air!,” which allows players to select wacky animals to take the steering wheel and go head-to-head in various racetracks.

As per the company, SKY is the first service provider to include AirConsole as a gaming offering for its subscribers.

“Our partnership with AirConsole is a testament of our commitment to providing all-around entertainment through different platforms for every Filipino family. We continuously strive to find more content and applications that our subscribers can enjoy with SKY services – truly leveling up entertainment at home with the family,” said SKY’s Pay TV Head Abigail Ng Sy.

The AirConsole Hero, the premium subscription of AirConsole, comes with access to all games, unlimited players, no ad breaks, in-game content, and other features. Users may also play these games through Apple or Android smartphones as gamepads and computer web browsers, Android TV, Google TV, tablets, or the SKY Evo Digibox as the console. 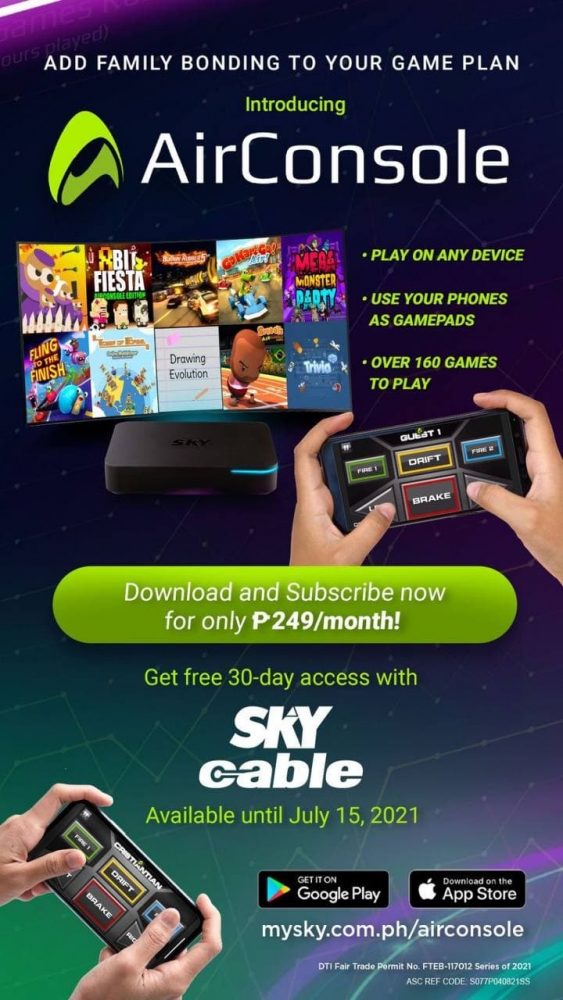 Anyone can subscribe to AirConsole Hero, even if they are not a SKY subscriber. Subscription starts at PHP 249 for one month and PHP 629 for the annual plan via Google Play Store or Apple App Store.

You may visit the official SKY website for more details about AirConsole.