The Lyceum of the Philippines University, in partnership with ESports and gaming talent agency Tier One Entertainment, might offer the first Bachelor of Science degree in ESports this year. 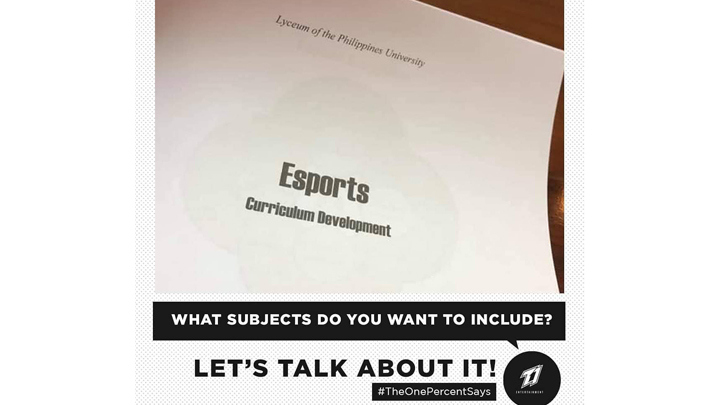 Alodia Gosiengfiao, popular cosplayer and Chief Creative Officer of Tier One Entertainment has drafted the curriculum for the bachelor’s degree and announced it on Instagram on February 19.  Tryke Gutierrez, Tier One’s CEO, has also said in a post that they are finalizing the draft for the four-year course. According to his post, students who graduate with a degree in ESports will have two tracks – game design and ESports management. While Tryke Gutierrez said that they can’t disclose the list of subjects yet, he did confirm that they were 80% done with the draft.

An esports course is on the way. Our CEO @trykegutierrez is at LPU, and with him is the first ever drafted curriculum for esports in the country. Lyceum of the Philippines University Manila and Tier One Entertainment are committed in making this dream a reality. We will be passing the curriculum to the Commission on Higher Education (CHED) on March this year. If this goes well, we might have a full course available by 2020. To our followers, we'd like to know your thoughts on this. What subjects do you want to include in the course? #TheOnePercentSays

Tryke Gutierrez noted that the course is not all fun and games. In his Facebook post, he said, “I also want to take this time to personally ask all the future enrollees to please take every subject seriously and learn whatever you can learn from the experts of the industry. We’ll do our best to push this industry forward but we need more help. Study hard, train hard. We need you. See you in 4 years!!” Tier One Entertainment will be passing the ESports curriculum design to CHED on March 4, and could possibly be offered in LPU starting this year.

See also  My DeFi Pet and DPET Token: Should you spend and play?

I am looking forward for my son. Please update me so I can enroll him. My son informed me about this and I will support him all the way.