Games based on movies you probably didn’t know existed

Movies and games are in some ways quite similar. Both have certain elements like a protagonist, antagonist and basically have a clear narrative as well. For example Naughty Dog’s Uncharted series and The Last of Us, those games are very cinematic and there are a lot of games that look like films already.

You won’t be surprised that there would be films that are adapted into games. There have been huge amounts of games based on movies over the years, sure, some are good and even better than the movie but others, well… let’s just say, are weird. 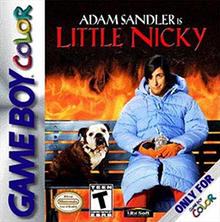 Yes! One of the most absurd Adam Sandler films actually has a game. It’s based on the happening in the film where you play as  Nicky Schear, one of Satan’s three sons as he attempts to save his father and prevent his brothers from taking over Earth. FACHKING SCHWEET!

Remember that movie with that weird puppet with those red swirlies on his cheeks that traumatized you when you were a kid? Well, it has a game equally as dark (and gross!). The player controls David Tapp, a former detective trapped in the Jigsaw Killer’s asylum filled with traps. The primary goal of the game is to traverse the asylum and solve traps in order to escape.

Based on probably the best Spiderman film ever made ( sorry Tom Holland fans) you play as Toby Maguire’s Peter Parker, a photographer for the daily bugle and part-time superhero in an open-world action game.

Platform/s: PSP and the Nintendo DS

Your favorite suburban nerd actually has a game. Even I didn’t know this game existed!  The game’s story is loosely based on the film, with some extra plot points thrown in to motivate Napoleon to wander around, thus unlocking the game’s 25 minigames.

Ok, so I guess I have to break a rule. One of the most angsty films actually has a fighting game. It apparently follows Tekken and Streetfighter’s formula which seems cool. Fight Club structures the formula around the premise of the movie, where two men meet secretly to fight each other into submission.

The game follows the player’s character as a new recruit in the Ghostbusters, a team of parapsychologists who pursue and capture ghosts. This game looks really fun I must say and you could finally relive your dreams of being a Ghostbuster! WHO YA GONNA CALL?!

The Classic Horror class is now an asymmetrical multiplayer game, pitting up to seven players controlling Camp Crystal Lake counselors against one player controlling Jason Voorhees. It is a semi-open world game, with players able to explore it further.

The game follows Riddick, the anti-hero of the two films Pitch Black and The Chronicles of Riddick, as he attempts to escape from a maximum-security prison called Butcher Bay. This game, in my opinion, is a lot better than the film itself.

The game is set in the year 1996, two years after the events of the first film, Ellis Lynch, a former police officer, and a veteran, travels to the Black Hills Forest to join the search party for a missing boy, nine-year-old Peter Shannon.

Platform/s: PC, PS4 and Xbox One

Despite the films concluding with such disappointment, Star Wars Jedi: Fallen Order is not. The game is set14 years before Star Wars: Episode IV and follows a Jedi Padawan named Cal Kestis as he is hunted through the galaxy by the Galactic Empire while trying to complete his Jedi training and restore the now wiped out Jedi Order.

Movies and Games are both things really close to me and I’m very happy that both of them are somehow creating new innovations for both formats. I cant wait to see a don’t mess with the Zohan game or an Animal Crossing movie. Happy Gaming!