Among the ASUS ROG Strix line-up of gaming laptops, a pair of them stands out among the crowd — the GL504 Hero II and Scar II editions, launched in Computex 2018. They both sport similar specs, but each is skewed towards a different demographic of gamer. The Scar II caters to FPS gamers, while the Hero II caters to MOBA gamers. 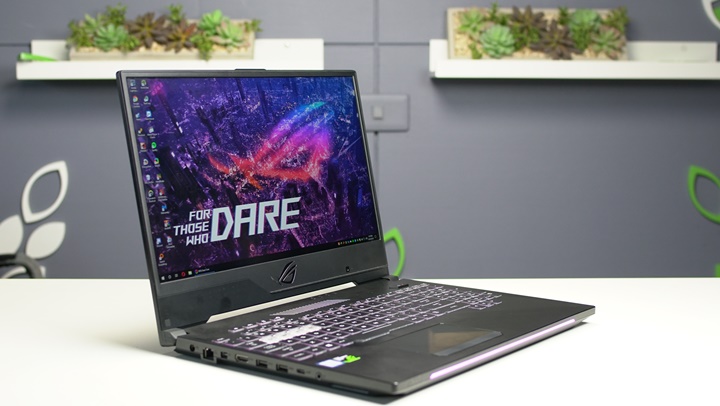 Since MOBA games typically have lower graphics requirements compared to a lot of FPS games, the Hero II comes with a GTX 1060 instead of a GTX 1070. Aside from that, the Hero II pretty much matches up with the Scar II with the rest of its specs. We get an Intel Core i7-8750H processor, 16GB of DDR4 RAM, NVMe SSD, 1TB SSHD, and a 15.6-inch 1080p 144Hz IPS display.

For the most part, the rest of the Hero II is pretty much a carbon copy of the Scar II, but let’s take a closer look. Starting with the most obvious thing that sets the Hero II apart, take a look at the keyboard. 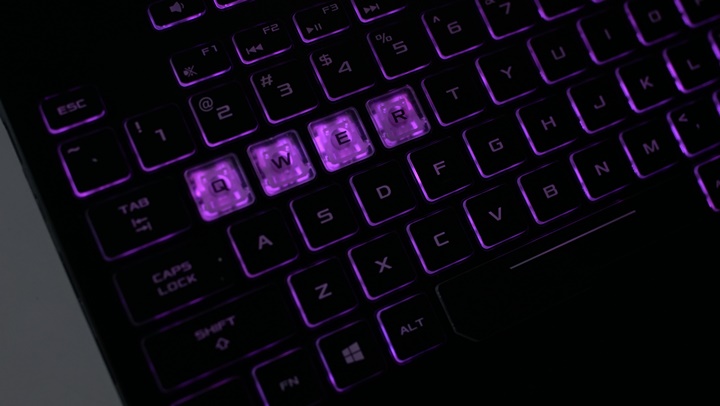 Like most ASUS ROG laptops, it’s got 4-zone RGB and Aura Sync, but as you can see, the QWER keys are different and stand out. This is one of the things that makes it a MOBA-centric laptop, as these keys are common controls in games like Dota 2 or League of Legends.

The keys are slightly mushy and require a bit of travel to actuate, but this is actually a good thing for MOBA games. Abilities are precious, and faster keys can result in cases fat finger where you accidentally press keys that you shouldn’t. 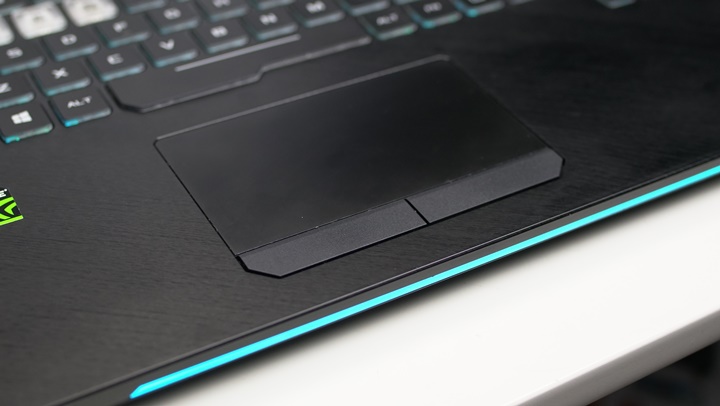 A big downside sits below the keyboard in the form of the trackpad. To put it simply, it just isn’t great. While the intended end-user of this machine will probably opt for an external mouse anyway, a good trackpad on a gaming laptop still has its value. The texture isn’t great, and we get physical left and right click buttons instead of a full-on click pad. 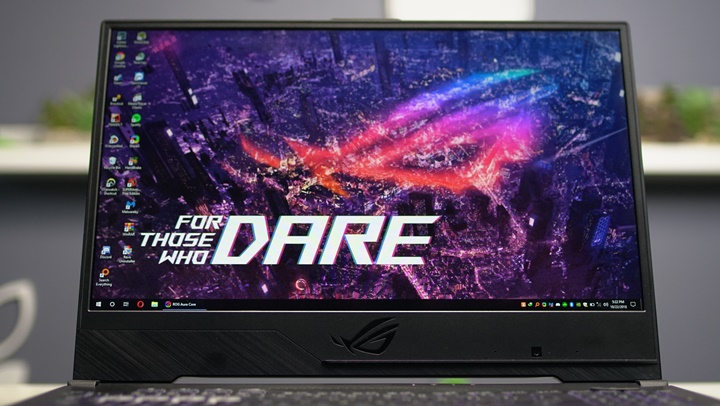 Looking at the screen, we get an impressive 15.6-inch 144Hz IPS panel with a resolution of 1920 x 1080. It’s a significant upgrade from the original Hero’s 120Hz display which had a response time of 25ms, compared to the Hero II’s 3ms. The unit is quite slim, and the display contributes to that. There is a lot of screen flexing, but not enough to cause any alert. While the screen part is thin and light, it’s still easy enough on the hinge that it passes the finger lift test. 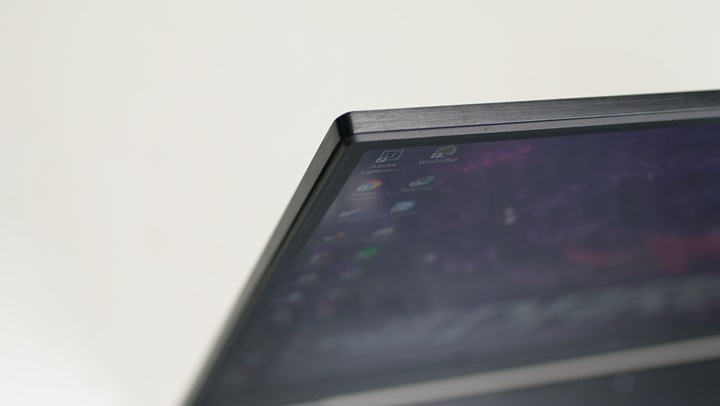 We also get really thin top and side bezels, as most of the chunk is transferred to the bottom. I don’t expect the end-users of this laptop to be using the webcam a lot, but the placement is very weird as it’s not just on the bottom, but towards the right as well. Looking at I/O, we have two USB 3.1 Gen 1, two USB 3.1 Gen 2 (one Type-A & one Type-C), mini DisplayPort 1.2, HDMI 2.0, RJ45 Ethernet, a full-size SD card slot, combo audio jack, and a Kensington lock. For a modern gaming laptop, this is a great selection as all bases are covered. Thunderbolt 3 would have been a great addition for possible external GPU support, but that would just be a luxury at this point. 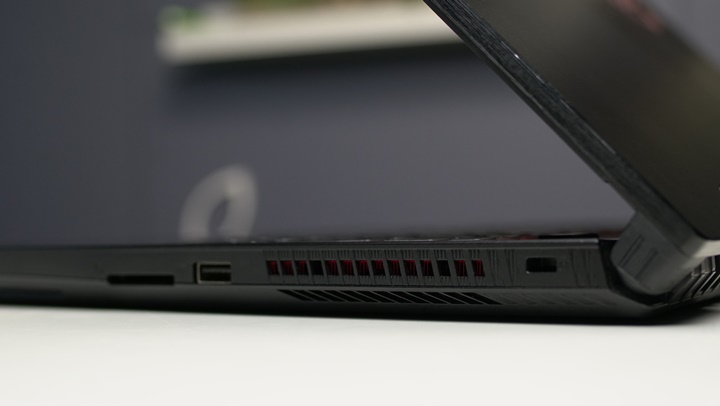 As for overall design build quality, it’s actually quite impressive. We get that really nice two-tone brushed finish with an RGB ROG logo on the lid, and the chassis isn’t the thinnest out there, but it’s still considered quite slim. Air vents are plentiful and while the GTX 1060 doesn’t require as much cooling as the GTX 1070, it’s still nice to have that triple-fan thermal solution built-in. 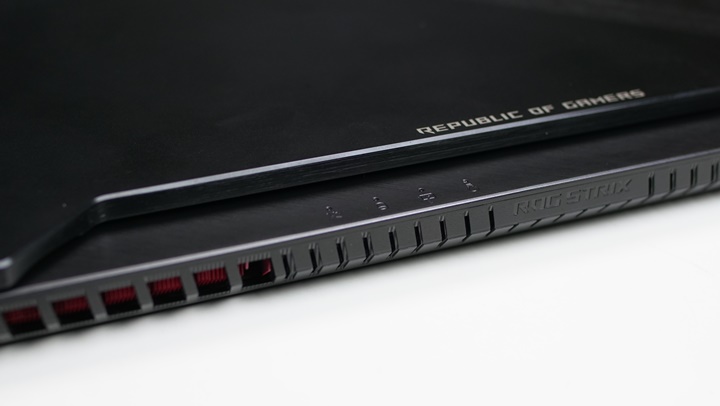 At about Php105k, you are getting a little less than what you’re paying for, in terms of raw specs. For this price, you should already be getting a GTX 1070, but considering that you already get 16GB of RAM, a 128GB NVMe SSD, and 144Hz screen, it’s still very justifiable. As with any gaming hardware brand, a huge chunk of the asking price is for the branding anyway.