Instagram’s stories have become another platform to connect and socialize with your followers. And under it, users can use adorable filters to customize their content. Unknown to many, there are also some Instagram game filters that you can use to escape from the mundanity of everyday life. We’ve dug some hidden game filters on Instagram that could be enjoyed by all ages. Just make sure to update your Instagram app to the latest version to access the filters listed below. As the name suggests, this filter lets you guess millennial phrases from a set of meaningless words. The words are arranged in order to resemble the sound of the phrases being guessed when spoken. A reimagined racing game, the filter developed by @jpxhelmet lets the users ride a bike virtually with a helmet. The aim of the game is to avoid obstacles along the way as the bike goes faster. There are two ways to jump over the obstacles: either you tilt your head or blink your eyes. 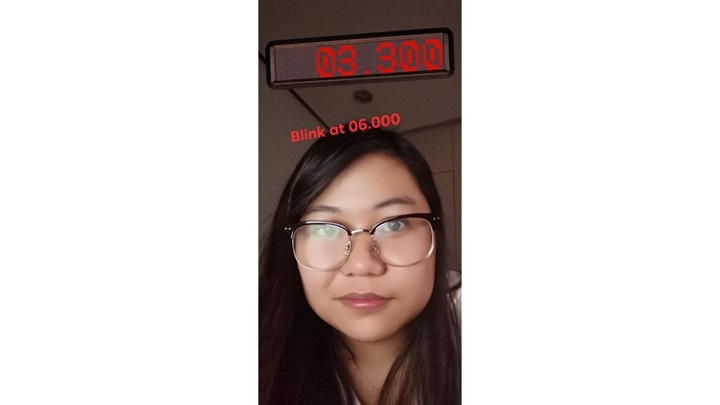 If you’re up to test your reaction time, then this filter is for you. Made by @yana.mishkinis, the filter challenges people to exactly blink at 6 seconds as shown on the timer above. We highly recommend using the filter in a well-lit place so it can detect your eyes accurately. 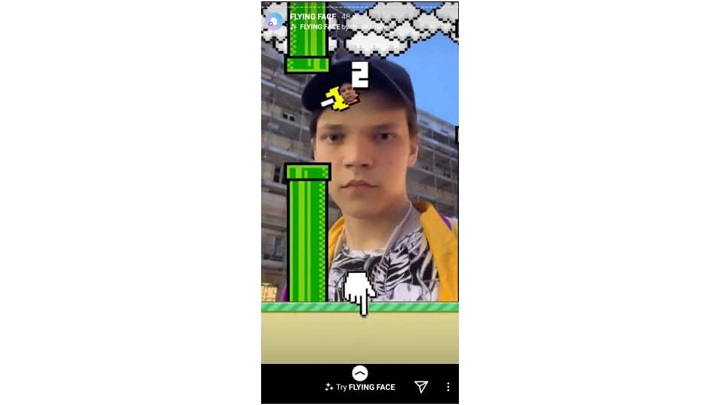 Remember Flappy Bird? This filter pays tribute to the exact game which became a global hit in the 2010s. But instead of tapping the bird to pass through the pipes, you become the bird and control where you go by blinking.  To use it, just go to @dvoshansky‘s Instagram and tap Flying Face on his featured stories. 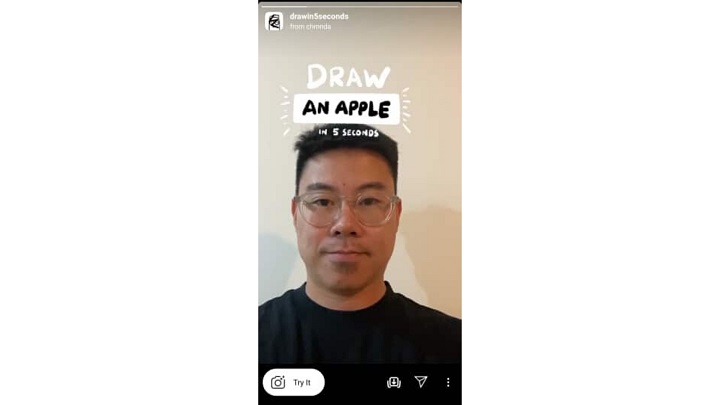 This filter takes a modern and quirky way to draw objects appearing on the screen. Its title sums up the mechanics of the game. Just like any other drawing games, the player is given up to 5 seconds to draw an object chosen randomly using their nose. 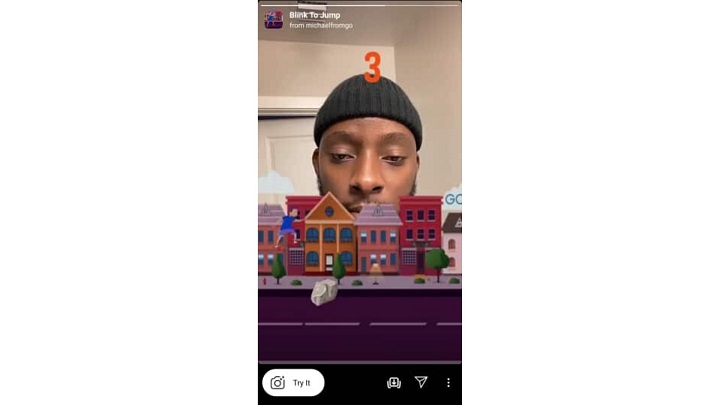 If you’ve have nothing to do and got bored, then you might want to try this filter. As its name suggests, Blink to Jump turns you into a boy who rides a skateboard. The aim of the game is to jump over the obstacles placed on the road as your character speeds up. 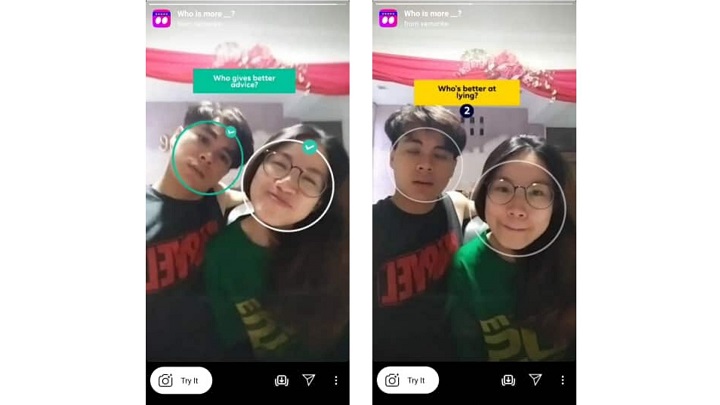 Should you want to play with a partner, this filter grants your wish. Tagged as one of the most popular filters in Instagram, Who is More? places people on an ambush interview and flashes random questions they need to answer. They’ll need to tilt their heads to point who is who on the set of questions. 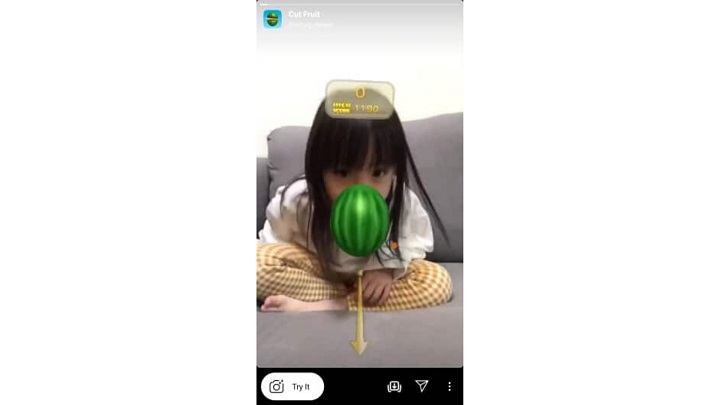 A filter inspired by mobile game Fruit Ninja, the filter enables players to slice fruits such as watermelon floating in the air on a specific time. There’s a lot of headbangs involved in this game as the players would need to tilt their head upwards, downwards, and sideways to cut the fruits efficiently. 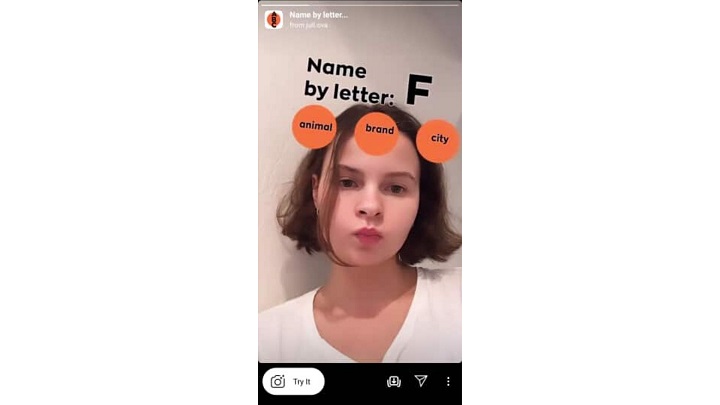 As a digital version of the children’s game PANTS, the filter asks the player to name a place, an object or thing, and a person that starts with a specific letter. Each category is also shown randomly, so players can’t cheat. 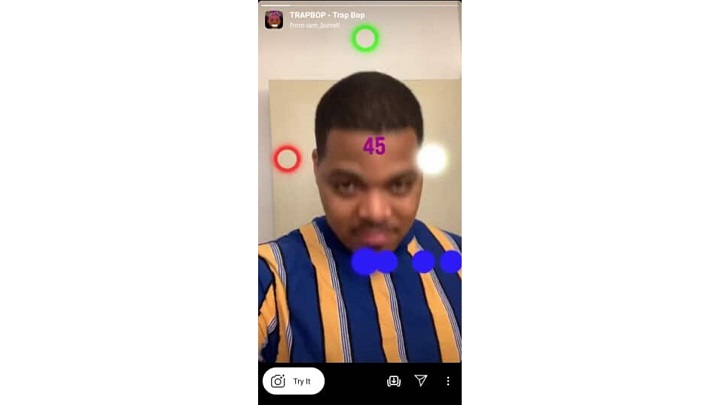 One of the best game filters from the list, TRAPBOP lets players be a DJ for a day and bop to the featured hip-hop music. As a rhythm game filter, it features little colored dots that players need to hit by tilting their heads on the direction of the dots. The more circles you hit, the more your points you gain. Be careful not to miss more notes or else, the music will die and the game will be over.

See also  Ghostwire: Tokyo for the PS5 priced in the Philippines Another game to play with your loved ones, the What Am I filter is similar to charades minus the actions portrayed with the players. In this filter, one will be the guesser and the other will be the verifier and describer of the flashed object on the filter. Through the filter, the guesser will turn into the flashed random object.

No touching for now 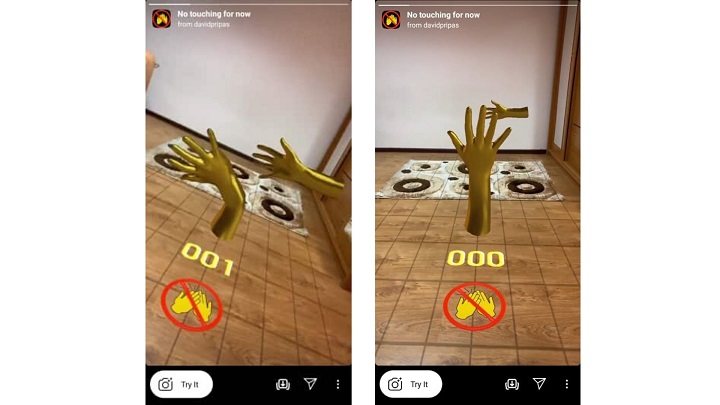 This another eccentric filter encourages social distancing measures like touching of hands. To avoid contact with the other hands that were passing through, tilt the phone in the opposite direction.

Note: To preview each filter, go to the camera button on the upper left side of Instagram, scroll left, find and tap ‘Browse Effects’,  then type the name of the filter or tap the View Effects button on the Effect Gallery’s home page.

And that sums up the list of Instagram game filters. We hope that we were able to give you alternative entertainment to kill boredom amid the quarantine period. Did we miss something else? Do share it with us below.