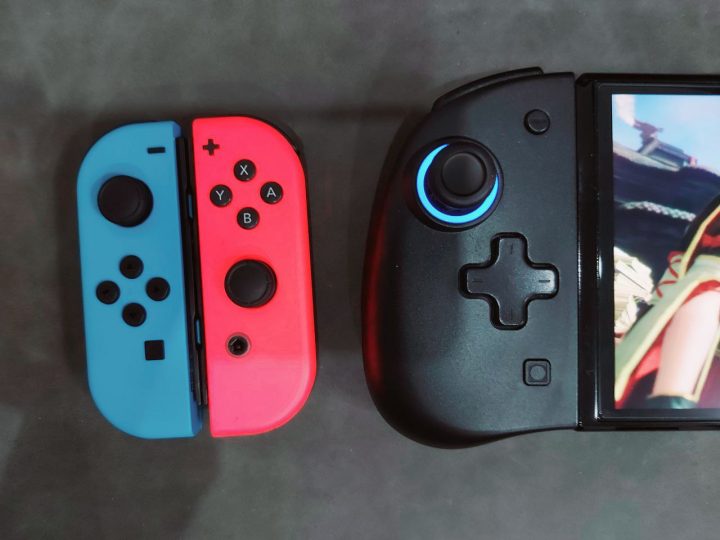 The original Nintendo Switch Joy Cons aren’t exactly the most comfortable things to hold when playing. With its symmetrical design it makes sense as to why it’s designed that way. But for those looking for a more comfortable alternative way to play their Switch games solo, here are a few ones you could choose from.

One of the first alternatives to the original Joy Cons, the Hori SplitPad Pro has been a go-to for those looking for a more comfortable alternative. Licensed by Nintendo, SplitPad Pro offers multiple designs such as one for Pokemon Legends: Arceus, Mario, and even Pac-Man. Another upside to this being a Nintendo licensed product, is that the qualit of the SplitPad will be consistent with whichever variant you prefer.

It does have some fallbacks however. With its competitive prices ranging from Php1,995 to Php2,250 depending on the design, you’d expect Hori to cut down on some of the features. for one, the SplitPad Pro can only be used when attached to the Switch, making it unable to play wirelessly. Although, Hori does plan on releasing an attachment to the SplitPad, making it possible to use them while it is wired to the dock. Another drawback would be no HD Rumble, or any rumble at that. Lastly, the SplitPad Pro does not contain any motion controls, so if you’re one to play Splatoon 2, or other games that would offer motion controls, forget about it.

In the end, the Hori SplitPad Pro is a great alternative to those looking for a cheaper, but at the same time more ergonomic feel to the Switch. Despite lacking some features, it’s an all around solid controller if you’re not too picky with what you want.

When the BinBok controllers were first reviewed by YouTubers such as SpawnWave and the Wulff Den, many flocked to purchase themselves a pair of these, myself included. Taking a look at its features, it looked more and more like a Hori SplitPad Pro “Pro” if that makes any sense, as it contains more features than the SplitPad Procould ever have.

The first thing that got me sold on these things were the fact that they have rumble, definitely not HD Rumble, but as someone who prefers receiving feedback from controllers, it was enough for me. Another feature that this controller has that the SplitPad Pro does not, is that it has the capability to be played wirelessly, it even comes with that rectangle thing where you’re able to connect the two controllers. At first, I found this to be extremely convenient, but then when you have an abundant amount of controllers, you only pretty much use these when attached to the Switch. These also have motion controls if you need them. Lastly, these things have RGB for those “REAL” gamers out there, and being able to change their colors is a cool little feature that they added in, so if you’re looking for Joy Con alternatives that have RGB, this one takes the cake.

Despite all these great features however, there are bound to be some flaws to the controller. For one, the D-Pad on this thing is abyssmal, as someone who loves to play 2D platformers, the BinBok controllers are a no go for me, however other people who were able to get their hands on these had differing results when purchasing these. Which brings me to the main flaw this thing has, which is quality control. Unlike the Hori, these controllers aren’t licensed by Nintendo, so the quality of the ones you’re going to get isn’t exactly the same as the one I got. But with varying prices of Php1,850 to Php2,699, you really can’t go wrong with these things.

The most recent addition to the alternative Joy Con market, the MOBAPAD M6/M8 looks to combine the features of both the BinBok Controller and the Hori SplitPad Pro. In terms of its similarities with the SplitPad, aside from them looking almost exactly alike, the only way to use these are while connected to the Nintendo Switch directly, as these controllers are powered by the Switch. If they are compatible with Hori’s controller attachment, I’m not too sure.

Compared to the BinBok controllers, the features of the MOBAPAD match them pound for pound. Not only do the MOBAPAD have rumble, but they also have motion controls, and from what I’ve heard, they’re miles ahead of the BinBok controllers. These bad boys also have interchangeable face plates, which allows you to change their colors between black or white, whether they plan on releasing for colors for the face plates I have no clue, but the option to switch them out is always nice.

But what really sold me on these are the mechanical buttons for the A, B, X, Y, RB, RT, LB, and LT buttons. For those mechanical keyboard enthusiasts, you know what I’m talking about. The satisfaction of pressing those buttons and hearing and feeling those inputs kick in just make your gaming experience all the more satisyfing. Despite all these premium features, its price point is fairly competitive to those other Joy Cons on this list. The MOBAPAD M6/M8 (they’re the same thing) costs around Php2,299 on Shopee and Lazada.