Redmi is adding another smartphone to its K30 line, the K30 5G Speed Edition. Redmi, through their official Weibo page, has announced that the K30 5G Speed Edition will be launched in China at 2 PM, on May 11. While not a lot of details were disclosed in the post, it’s been listed on JD, revealing several key specs. 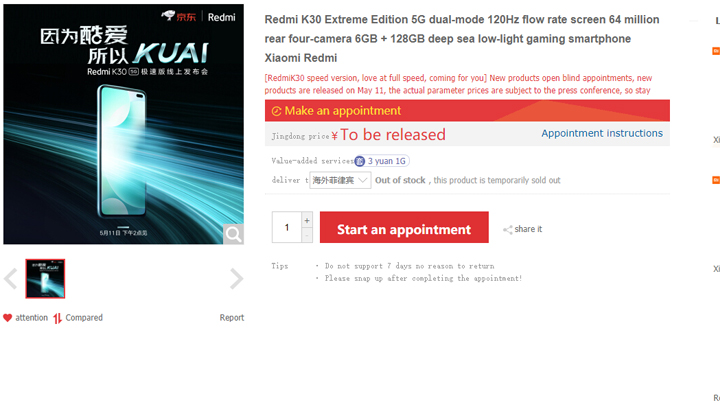 According to the listing, the Redmi K30 5G Speed (or Extreme) Edition will sport a 6.67-inch FHD+ 120Hz IPS display. Under the hood, the listing has leaked that it will come with an unannounced Snapdragon 768 chipset paired with 6GB of RAM and 128GB of storage. The device is listed to sport a quad rear camera set up, consisting of a 64MP primary shooter, 8MP ultra-wide, 5MP macro, and a depth sensor. Meanwhile, a dual front camera setup sits in a pill-shaped punch-hole design.

Stay tuned for our coverage on its launch.