The first time we got our hands on the GPD Win Max, we were quite surprised with its design. It’s the first time we’ve encountered such a small laptop in this form factor and features that make it look like a handheld gaming device. 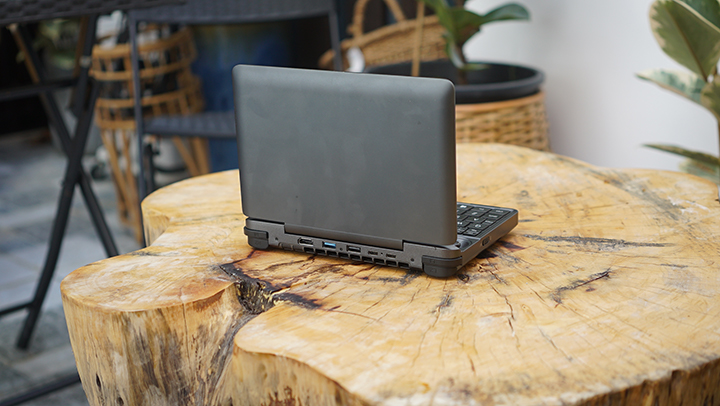 The GPD Win Max is basically a portable gaming device that’s powered by Windows and runs on either an Intel or Ryzen processor. This specific model came with an AMD Ryzen 7 4800U with 16GB of DDR4 RAM. It offers a simple proposition — play all the PC games on your handheld anytime, anywhere. The GPD Win Max offers the portability of a handheld like the Nintendo Switch and the performance of a laptop. It is way smaller than a bulky gaming laptop (about a fourth of its size and a third of the weight) but that did not stop them from adding all the bells and whistle you’d normally get in a laptop. It doesn’t look much from the outside but wait ’til you get a good look on the inside. The display is just 8 inches with a screen resolution of 1280×800 pixels which is just enough for most games but don’t expect really high-quality graphics here. Besides, since you’ll be playing with the screen closer to your eyes than normal, the 8-inch looks just good enough. It also supports touchscreen gestures so you can easily navigate the operating system if you find the small trackpad and pointer too uneasy.

See also  Rules of Survival will cease operations on June 27 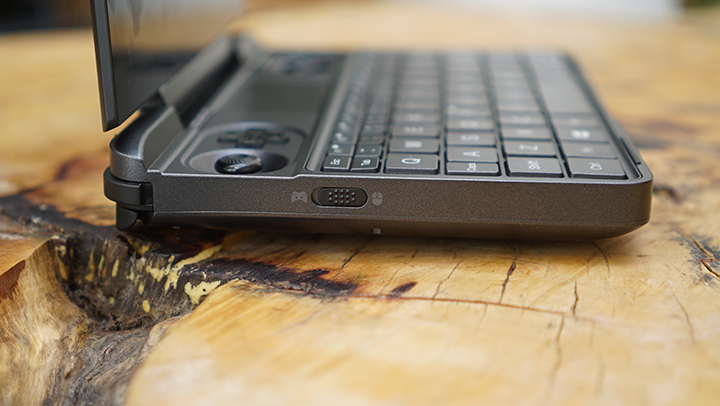 A toggle switch is found on the left side for you to select when to use the mouse of the gamepad as the primary controller when gaming. 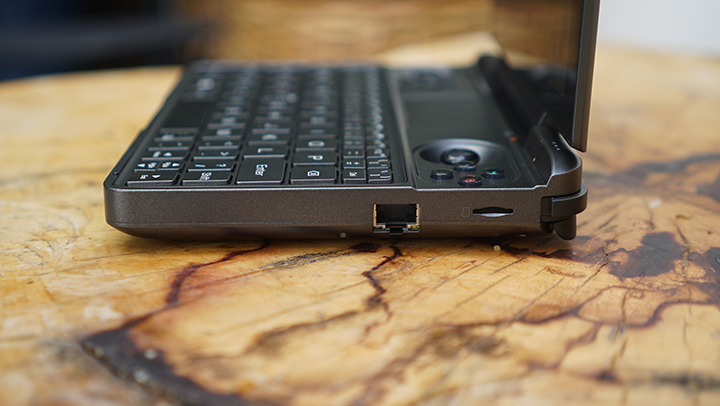 On the right side, you can find the microSD card reader and a full-sized ethernet port when you need to connect to the wired LAN.

Once you open up the lid, you’ll be greeted with a hybrid QWERTY keyboard and game controllers that are packed in a tiny form factor. 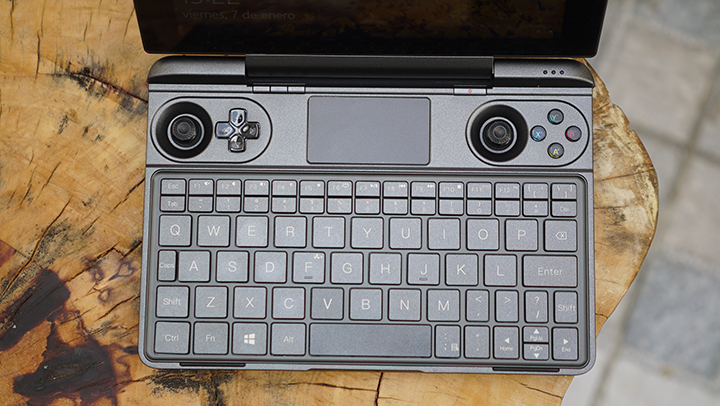 It has a D-pad with 4 face buttons, 6 shoulder buttons and 2 analog sticks. The trackpad is also placed at the top middle section to maximize the remaining space so you’ll have to get used to that when typing or navigating Windows 10. The number keys and function keys are all present but they’re way smaller than the other keys so it’s a lot of getting used to and familiarizing. 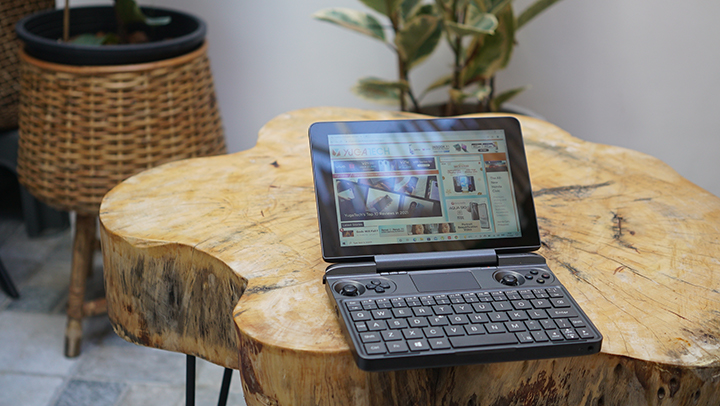 The majority of this article was written on the device itself and while it does not have the best keyboard, I was able to work comfortably for the most part.

To say that the keyboard area is a bit cramp may be an understatement but for its size, I think it’s the best layout one can get out of the tiny space. As for battery life, we’re actually fairly impressed with the GPD Win Max. On average, we’re getting around 6 to 7 hours on mix use with a maximum battery life of about 10 hours when doing productivity work (MS Word, Photoshop, etc) and about 2.5 to 3.5 hours when on full gaming mode. The battery is 3 x 5000mAh Lithium polymer with a 65W fast-charging capability. 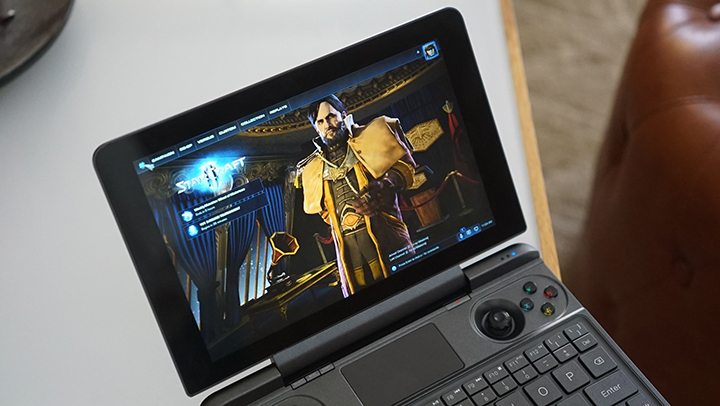 As for gaming, well it’s actually playable and very capable we’re utterly impressed. The GPD can work in many ways and you can adapt your usage to the gameplay — it can be a handheld gaming device with the D-pad and controller sticks (great for first-person shooter) or a typical laptop where you plug in an external mouse and play real-time strategy games or MOBA. The other controllers become usable depending on the type of game you’ll be playing. 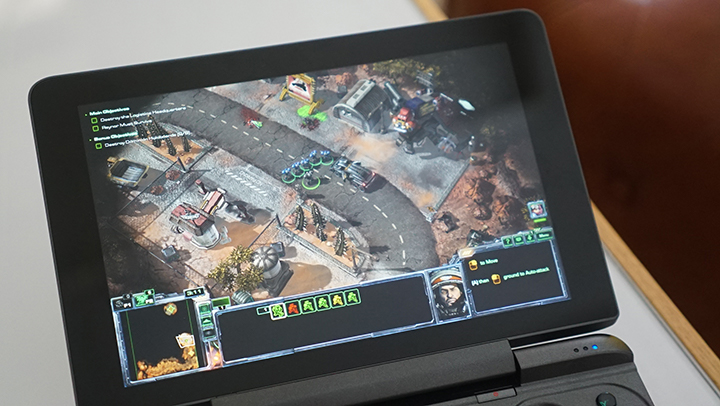 The level of ease or comfort will vary greatly (I personally had a hard time with the game controllers, but that’s me) but in due time, you get the hang of it.

Performance-wise, this is a pretty capable device. The Ryzden 7 4800U, based on the Renoir architecture, runs at a base clock speed of 1.8GHz, goes up to 4.2GHz with 8 cores, and supports SMT/Hyperthreading (16 threads). It scores better than an Intel i7-10870H for average CPU Mark benchmarks. The APU also includes a Radeon RX Vega 8 integrated graphics card with 8 CUs and up to 1750 MHz clock speed. 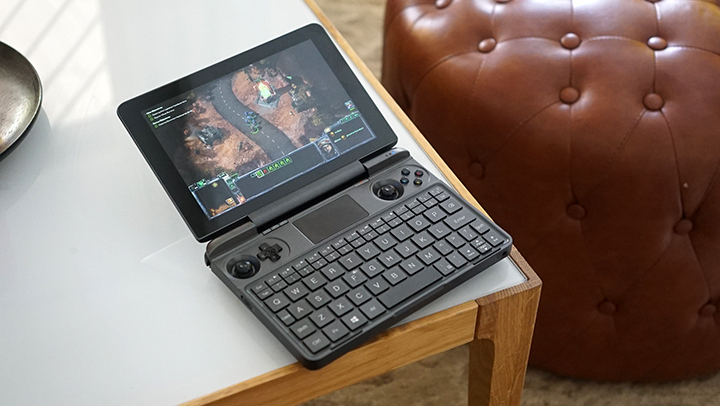 The GPD Win Max 2021 has a suggested retail price of Php50,995 and is available in all Data Blitz stores nationwide. Not bad for a unique and portable gaming laptop running on Ryzen 7, 16GB of RAM and 1TB of SSD. This laptop is not for everyone but to those looking at a capable gaming device that’s very portable yet powerful and offers a customizable handheld gaming experience, this could be it.

What is the name of the game on the pictures please ?